About The Lumpy The Elephant

Lumpy is treated as an outcast by the other toys, because he is so much bigger and less agile than they are. They never include him in their games so he always feels lonely and sad.

One day Lumpy’s companions find themselves faced with a serious predicament. Freddy the Frog is trapped in a dark, scary place and his friends can’t get him out. Who will save him?

To everyone’s surprise, Lumpy steps forward to save the day and he gains a new found respect from the other toys. This is a charming story that describes how an individual’s unique talents and abilities can often go unnoticed.

What People are Saying —

“This book lets children know that everyone has value and talent no matter their size or appearance.”
Frances Miller, Tucson, AZ

“Our family loves the book and loves the lessons learned from the book. Very cute elephant!”
Rene Fields, Nashville, TN

Lumpy the Elephant is a fun and inspiring story for pre-schoolers and kids in the lower grades. The brightly colored illustrations bring the book’s characters to life. In an environment where kids are sometimes unappreciated by their peers, this story shows how an individual can gain renewed respect, when his or her unique qualities come to light. My kids love it.
Barbara Gray, Athens, GA

This delightfully written and illustrated book shows children how one’s differences can actually be their strengths. An outsider among the toys, Lumpy the Elephant becomes the hero rescuing a friend in need. This classical story is sure to become a child’s favorite.
Margaret Burkholder, Tucson, AZ

Diana Hawkins does an excellent job with this delightful story that sends a positive message to kids across a wide age range. Very well written and illustrated.
Joanna Robertson, Afghanistan

Lumpy the Elephant is a fun and inspiring story for children aged 3-8. The book is easy to read for first and second graders and perfect for reading to the younger set.
Rosemary Chisnall, Mesa AZ

Hand written message from one of the elementary school students that Diana read to:

Lumpy the Elephant is a soft toy elephant who lives with two sisters, Margaret and Joanna. Like his species in the wild, he is so much bigger and stronger than other animals. He wishes he had more in common with the other toys.

Of all the toys in Margaret and Joanna’s bedroom, Oscar is the sensible one. He definitely fits the part of the “Wise old owl.” Even though as a toy, he is unable to fly he can still imagine soaring high above the treetops.

Freddy is an adventurer, always ready

to leap and jump into unexplored

Like his cousin the Tortoise, in the story about the tortoise and the hare, Tommy is slow and steady. He’s also a worker and can carry things on his back.

Gilbert and Gertie are homemade toys created out of fabric scraps. Their long, skinny legs are perfect for dancing.

Soft toys, named Gonks were first created during the First and Second World Wars to keep children’s spirits high. Materials to make toys were scarce during those years, so mothers made them out of old socks and rags.

Diana M. Hawkins originally wrote this story when her two older daughters were just toddlers. Today the oldest of their children are in high school. Diana grew up in Zimbabwe and Lumpy was inspired by her life-long love of elephants. She left Africa in the 1970s and settled in the United States, where she pursued a career as a journalist and environmental writer. This was her first children’s book.

OTHER BOOKS BY THIS AUTHOR

Shadows along the Zambezi (http://www.amazon.com/Shadows-Along-Zambezi-Diana-Hawkins/dp/1475954697) 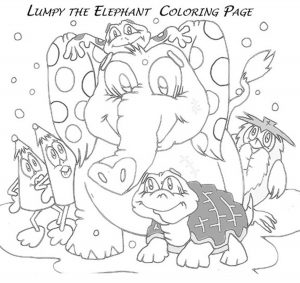 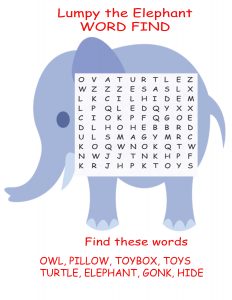 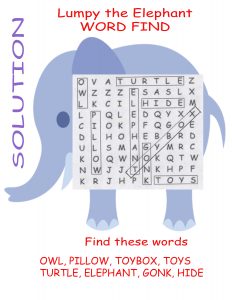